In doing so, we derive profit from converting Carbon Dioxide and Wastewater
into valuable commodities.

We have worked in microalgal biotechnology and sustainable engineering for nearly 40 years, deploying the UK’s first microalgae based sewage treatment process in 1992 and the World’s first Carbon Capture Microalgal Biorefinery in 2008.

Our mission is to pioneer engineered biotechnological solutions which will reduce greenhouse gas emissions, prevent the pollution of aquatic environments, cut our reliance on fossil-fuel based products, and instead produce replacement alternatives economically, cleanly, carbon negatively and sustainably.

How do we exploit Greenhouse Gas Emissions and Water Pollution?

Approximately 1 billion years ago, microalgal photosynthesis evolved and converted Earth’s atmosphere from a high to a low CO2 World.

Earth’s atmosphere today is very different from its prehistoric antecedents a billion years ago, when volcanoes formed the first atmosphere by spewing water vapour, sulphur dioxide, nitrogen, and carbon dioxide into the air.
Primitive photosynthesis by microalgae consumed the carbon dioxide, cooled the planet (Global Cooling) and created the oxygen rich atmosphere that allows the rich biodiversity to exist today.

Concurrently, they also cleaned our oceans and terrestrial aquatic habitats by consuming the vast array of metals and organic chemicals present in the ‘Primordial Soup’

The by-product of early photosynthesis were fossil fuels which we burn today, causing the reversal of Global Cooling, Global Warming!

Microalgae therefore have the best track record of any potential solution for climate change mitigation and pollution prevention, and the Greenskill team has figured out how to turn back the clock and use microalgae to combat both Global Warming and Aquatic Pollution.

Microalgae farming is not new. For hundreds of years the Chinese, Indigenous  Americans and Africans have been cultivating microalgae for food and medicine.

After World War II (WWII), there was the growing fear of a ‘Malthusian
catastrophe,’ or a major food shortage caused by the exponential growth of the human population, so many countries began to devote research efforts to identify ways to increase agricultural productive. This was the beginning of the Green Revolution.

Furthermore, with the increasing threat of nuclear war after the end of WWII, the US and USSR began a nuclear arms race. During this conflict, the need for methods to sustain humans in controlled environments, like nuclear submarines and space capsules became awkward engineering challenges. Microalgae showed the potential to close the loop for these life-support systems.

Experiments into the mass cultivation of microalgae began in the late 1940’s and
quickly publicised microalgae as the food source that could end world hunger and support the ever growing population. Early experiments confirmed the benefits of microalgae over traditional crops: fast growth rate, high protein content, and the ability to use non-arable resources for growth.

In 1977 Dai Nippon Ink and Chemicals Inc. established a commercial Spirulina plant in Thailand, and by 1980 there were 46 large-scale factories in Asia producing more than 1000 kg of microalgae (mainly Chlorella) per month and in 1996 about 2000t of Chlorella were traded in Japan alone. Other Spirulina plants were eastablished in the USA (eg. Microbio in California and Cyanotech in Hawaii).

Commercial production of Dunaliella salina, as a source of ß-carotene, became the third major microalgae industry when production facilities were established by Western Biotechnology Ltd and Betatene Ltd (now BASF Nutrition & Health) in Australia in 1986. These were soon followed by other commercial plants in Israel and the USA. As well as these algae, the large-scale production of cyanobacteria (blue-green algae) commenced in India at about the same time.

More recently several plants producing Haematococcus pluvialis as a source of astaxanthin have been established in the USA and India. Thus in a short period of about 50 years the industry of microalgal biotechnology has grown and diversified significantly.

The biodiversity of microalgae is enormous and they represent an almost untapped resource. It has been estimated that about 200,000-800,000 species in many different genera exist of which about 50,000 species are described. Over 15,000 novel compounds originating from algal biomass have been chemically determined.

They can grow rapidly and their high photosynthetic efficiency coupled with the ability to accumulate a large amount of bioproducts underpins their potential as a sustainable source of industrial raw materials.

Microalgal cultivation does not require fertile land, large quantities of freshwater, and herbicides and pesticide when compared to the other crops and thus will not be competing for resources.

In general, microalgae culturing system can be broadly classified into two categories, which are the open pond and photobioreactor. Each system has its pros and cons.

Open pond
Open pond cultivation has been one of the oldest and simplest ways to cultivate microalgae in large scale and currently, raceway ponds are most frequently used.

Photobioreactor
The photobioreactor (PBR) an enclosed system which does not allow direct exchange of material between the culture and environment and overcomes several constraints commonly faced by open pond culture design. PBRs are more compact compared to open pond, therefore providing more efficient land usage. Second, the system provides a closed and highly controlled growth condition for the culture, thus able to produce a contamination free, single strain microalgae culture.
In addition, the highly controlled culture condition can also translate into higher nutrient and metabolic efficiency which results in higher biomass production per unit of substrate.

However, both tubular and flat PBRs require significant land area to efficiently capture photons in sunlight. This land area requirement is prohibitive in the context of carbon capture and wastewater treatment. 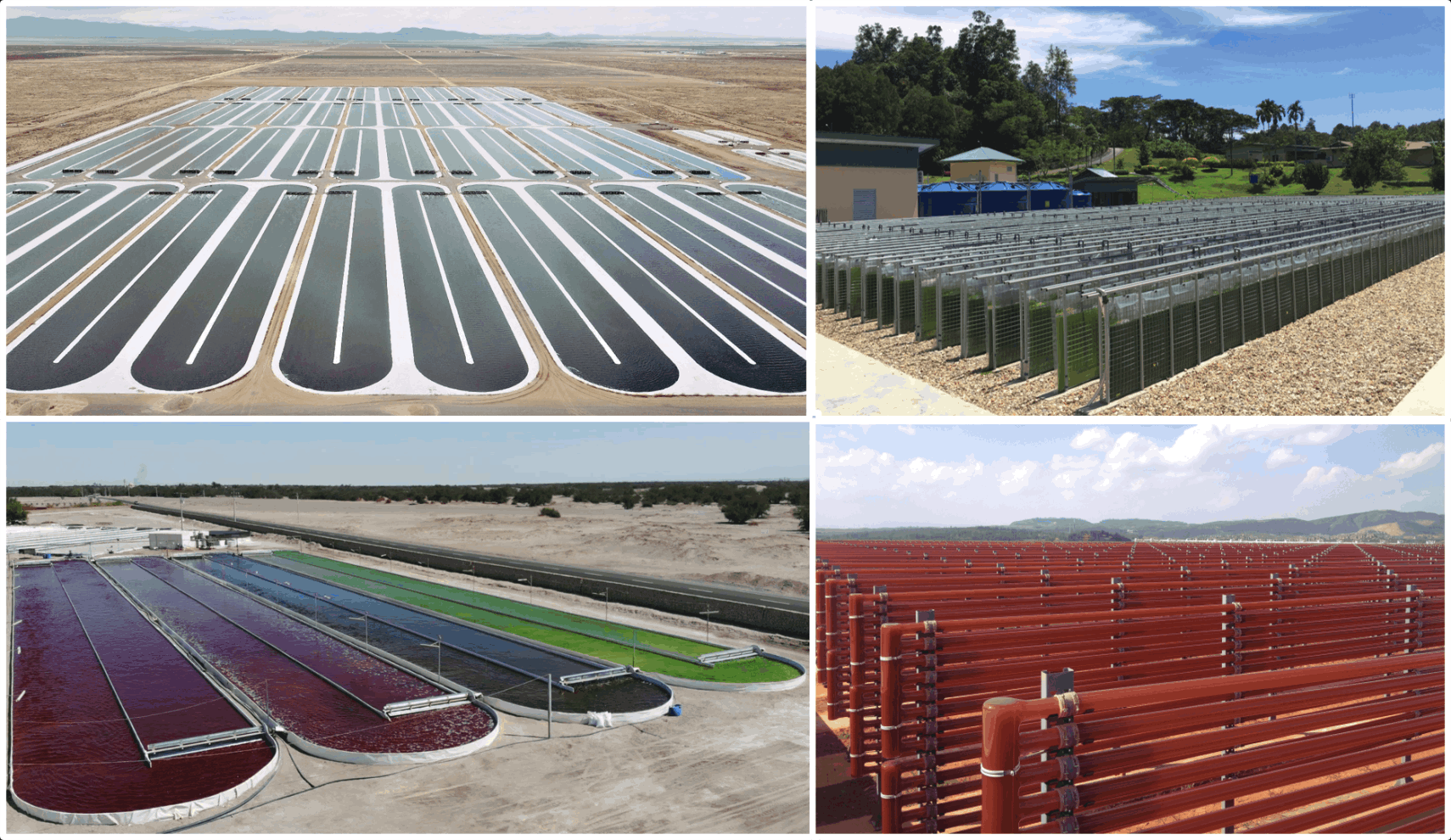 If we don't act, the world will change dramatically in many of our own lifetimes and for most people that change will be for the worse.

Today we have a window of opportunity.

Slashing greenhouse gas emissions will be the key to turning things around.